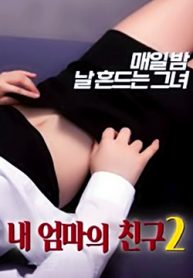 My Mother’s Friend 2 is a Korea movie released in 2019. The film is directed by x. Two months after Tae Yoon’s parents divorced, his father found a new mother to live together. Not long after, his father had an accident in his business. Tae Yoon suspected that the new mother was making trouble, so he installed it in the new mother’s bedroom. The pinhole camera monitored her, and soon, he also discovered the taboo secret between this new mother and her friend….