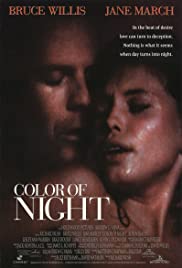 Dr. Bill Capa, a New York psychiatrist, falls into a deep depression after an unstable patient dies by suicide in front of him by jumping from his office window. The sight of the bloody body clad in a bright green dress causes Bill to suffer from psychosomatic color blindness, taking away his ability to see the color red. Bill travels to Los Angeles to stay with a friend, fellow therapist Dr. Bob Moore, who invites him to sit in on a group therapy session. However, Bob is violently murdered in the office and Bill is plunged into the mystery of his friend’s death.

Lt. Hector Martinez considers everyone in Moore’s therapy group, including Bill, as suspects in the murder. Bill continues to live in Bob’s house and begins an affair with Rose, a beautiful but mysterious young woman who comes and goes. Bill takes the therapy group, which includes: Clark, a temperamental OCD sufferer; Sondra, a nymphomaniac and kleptomaniac; Buck, a suicidal ex-cop; Casey, who paints sado-masochist images; and Richie, a 16-year old with social anxiety and a history of drug use.

After Casey is found violently murdered, Bill becomes the target of several attempts on his life. He discovers that all but one of his patients have been romantically involved with Rose. He eventually learns that “Richie” is really Rose, and the murders were the work of her deranged brother, Dale. They once had an actual brother named Richie, who was molested by his child psychiatrist along with Dale.

After Richie committed suicide, Dale abused Rose into playing the part of their brother. Rose began to re-emerge during therapy and, under another personality named “Bonnie”, started relationships with the other patients. Dale proceeded to kill them, fearing that they would soon link Rose to Richie.

Bill confronts them and is overpowered by Dale, who is about to kill him with a nail gun but is instead killed by Rose. Deeply traumatized, she then tries to commit suicide. Bill is able to stop her, bookending the story with two suicide attempts, one at the beginning, resulting in Bill’s loss of color vision, and one at the end, thwarted and resulting in his regaining it.